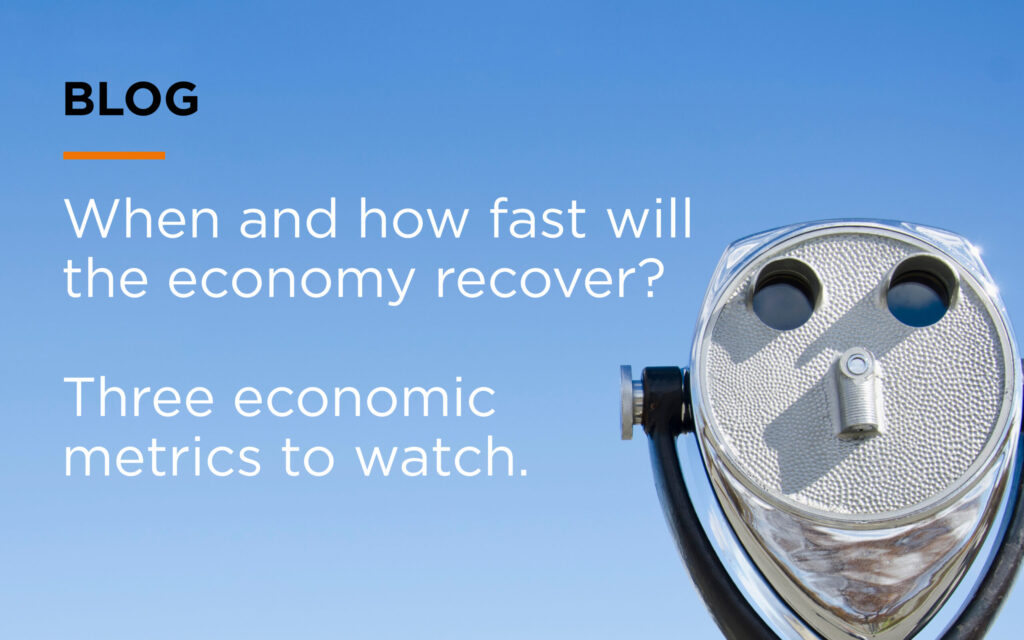 When And How Fast Will The Economy Recover? Here Are Three Economic Metrics To Watch

The economy will recover from the pandemic. There’s no doubt about that. But there is a lot of doubt about when, and how fast. As cases continue to rise and shutdowns proliferate, there’s not a single economist who can accurately answer these questions—no matter how hard they try or how smart they are. And unfortunately, our steadfast economic indicators such as GDP and the unemployment rate are recording such unprecedented swings, they’re unreliable, at least during these times.

But you have a business to run. There are people relying on your decisions. You need to know the answers to these questions, because the answers will drive your investment, hiring and spending decisions. So what economic metrics can help? The is tracking those metrics that are based on actual, real-life data and not surveys and polls. There are three that I follow that you probably haven’t heard of. But they’re very relevant right now.

The first is the Open Table State of the Restaurant Industry. Open Table is a popular mobile app that’s used by millions of Americans every year to make reservations. Of course, the restaurant industry has suffered greatly during the pandemic. But when things get better, people will once again be eating out and spending money. And they will certainly be making restaurant reservations using Open Table. The company has been publishing data weekly in some of the biggest states and nationally that tracks reservations being made by their users. Right now the levels are more than 50 percent off of pre-Covid activity, which should come as no surprise. But I’m watching. Because as these numbers start to increase—and they will increase—that will be a strong indication that the economy is getting back to normal.

The next metric I like has to do with travel. Every day the Transportation Security Administration publishes the number of travelers that pass through the nation’s airports. The bad news is that travel levels are still about 40 percent of pre-pandemic levels. And there’s more bad news: it’s not rising very fast. Again, not a surprise. I know we’re doing a lot virtually, but humans need human contact. When people aren’t travelling it means that deals aren’t getting done, conferences aren’t held and families aren’t taking vacations. When I see these numbers begin to consistently improve that will make me feel confident that the pandemic’s effects are waning, people are getting tired of Zoom and both business and leisure travelers are spending money.

Finally, there’s overall business conditions, and there’s no better index than the Institute of Supply Management Business Conditions Index. The ISM is essentially an association of purchasing managers and each month the organization collects data about what else? What’s being purchased! And when. And how much. After collecting this data from their members, the ISM Business Conditions Index is then published separately for manufacturers and service providers. When purchasing managers are buying that’s clearly a good thing for the economy and for at least the last two months both sectors have shown growth. I’ll be keeping a close eye to see that trend continue.

These are just three of about a dozen metrics that I look at every day, week and month. They’re not governmental polls, like GDP and unemployment. They’re hard numbers based on actual business and consumer behavior. None of my metrics look particularly great right now. But they’ll improve. And when they do I’ll know that the economy is improving – and I can start becoming more offensive in my decision making. I look forward to that happening sooner rather than later!

If there’s only one number you analyze on a regular basis, make it your company’s operating.. read

In business since 1998, Paige NeJame knows that a healthy company has access to working capital… read

No matter your business, you require capital to operate. Whether for payroll, new equipment, inventory or.. read